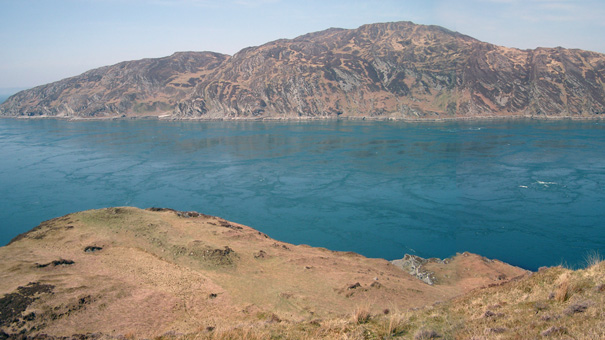 The corryvreckan Gulf from Jura

The Gulf of Corryvreckan is named after a Scandinavian prince 'Breacan', who according to legend is supposed to have drowned in the gulf trying to win the hand of a local princess.

About two miles long and one mile wide, at it's deepest point it is 219 metres in depth with the average being about 100.

As well as being home to the whirlpool it is also the haunt of Golden Eagles, Otters, and more recently White Tailed Eagles which appear to be thriving.

There is also a good chance of seeing Dolphins and Porpoises, as well as many types of whales including Orcas, although these are quite rare.

Scarba is now uninhabited but up to 60 people lived there in the 1800's, occasionally Stags will swim accross the gulf from Jura, no mean feat!

The North east end of Jura is inhabited mainly by deer, sheep, and some wild goat herds. See the links section for the Jura website.
About
PreviousNext