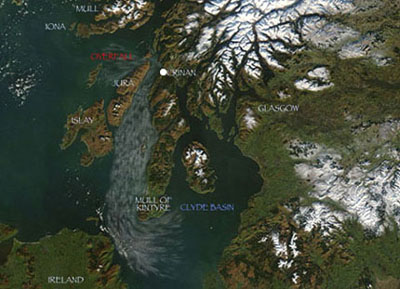 On a spring tide water is pulled up the Sound of Jura this draws some extra water out of the Clyde Basin. When this water reaches the north end it is squeezed by the narrowing of the sound, just before it enters the Crinan Basin.

The lochs of Crinan, Craignish and Melfort are already full and although some water escapes towards Fladda the bulk of the water has nowhere else to go but into the gulf. As the water enters the gulf it encounters a 219 metre deep hole just inside the east entrance which rises steadily towards the pinnacle.

One of the reasons the sound of Jura can sometimes be quite rough is the holes and bumps in the sea floor, this along with tidal strength contributes to the amount of turbulence even before the water reaches the gulf.

The water drawn up on the west side of Jura is lower as it encounters no opposition, when the water exits the gulf it falls onto this water and mixes with it. Known as The Great Race this can stretch as far as five miles towards the island of Colonsay to the west.

It is best described as similar to an old style washing machine and is usually avoided by small boats, which will swing well to the west dring a spring tide when heading up the east side of Jura. I remember watching this area when I was on Jura filming the whirlpool and it's possible some of the waves could be as high as 30 feet. Several waves appear to combine to produce a single large one.
About
Next